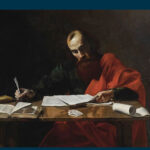 On the eve of the Reformation, the Roman Catholic Church was a bath with two very dirty babies in it. One was doctrine and the other was works. Both were so dirty they were almost unrecognizable. The Reformers recognized the doctrine baby and saved it, but failed to see the works baby and threw it out with the dirty bathwater. Well within a century of the English Reformation and the dissolution of the monasteries the government was passing poor laws to help those who were no longer being cared for by the monastic system. Our modern social dilemma, and the rise of socialism and the Welfare State, which is secular humanism’s defective and ungodly answer to that dilemma, is the consequence of a half-cocked Reformation.

It has taken 500 years for the full implications of this defective half-cocked Reformation to become manifest and its inadequacy clearly understood, though most Protestants even now fail to recognize the truth staring them in the face. As always, the real answer to this dilemma lies with a full-scale renaissance of the Christian faith, not another half-cocked Reformation, which will achieve nothing. The purpose of this book is to propose a way forward to the realization of that full-scale renaissance of the Christian faith.

By Him All Things Consist

“Another King, One Jesus”