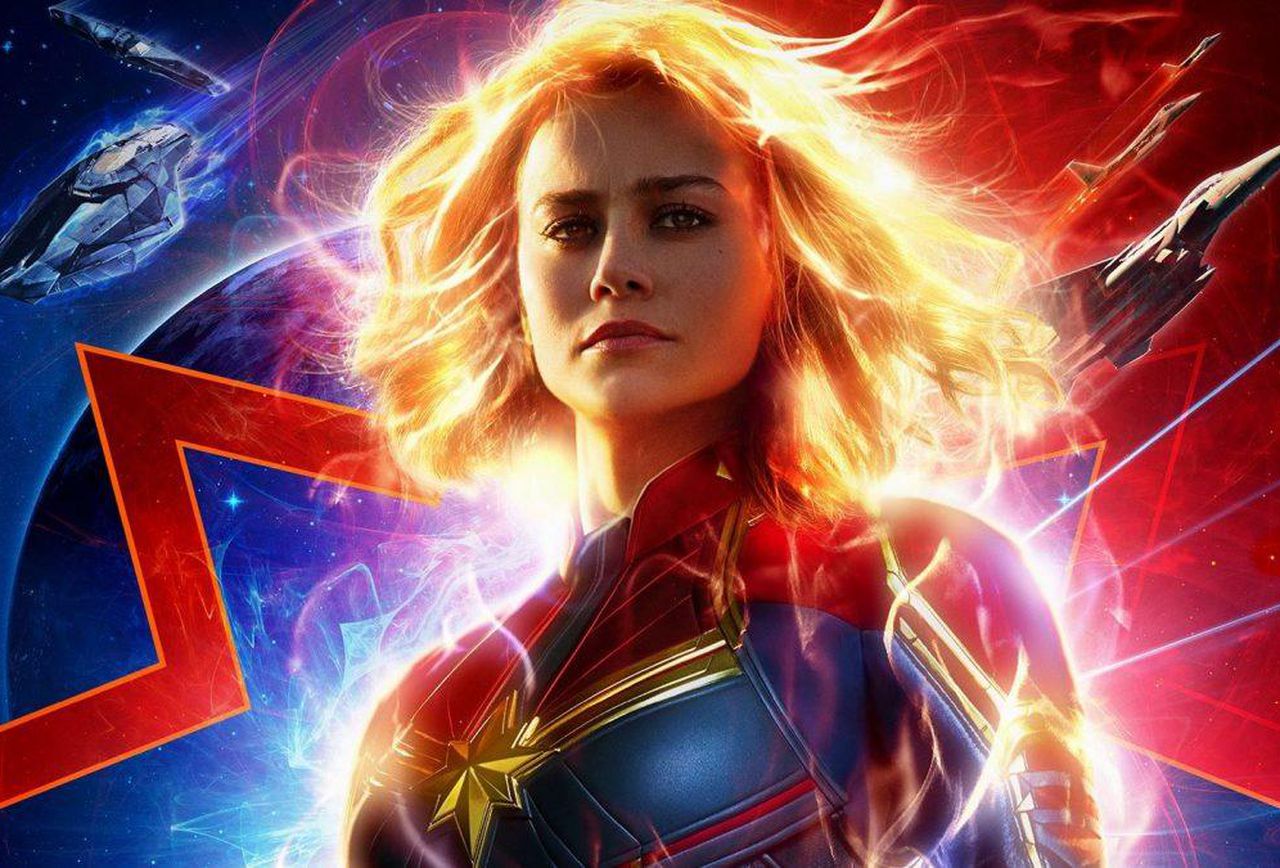 Why We Need Captain Marvel

Some folks loved it. Some folks thought it was a decent Marvel film, but nothing to get excited about. Some folks, gifted with the ability to see into the future, hated it from the moment the first trailer dropped, and have already been boohooing about it on the internet for months. Pretty much the only thing you won’t find on the Internet is someone who doesn’t have an opinion about Captain Marvel, and I’m afraid I can bring you no relief. I, too, have a Captain Marvel hot take.

Captain Marvel is the 21st film in the Marvel Cinematic Universe, and much has been made of the fact that it’s the first with a female lead. Personally, I remain supremely indifferent to this. The MCU brought us Best Chris (that’s Hemsworth, for those just joining us) smashing things with a hammer and a joyous grin, and also the pure beacon of hope and light that is Steve Rogers, one of the few characters in contemporary pop culture who is undeniably masculine while also being humble, gentle, self-controlled and a peacemaker. More than that, it also brought us women like The Winter Soldier’sNatasha Romanoff and her goals-worthy friendship with Steve, Black Panther’s smart and compassionate Nakia (and Okoye, and Shuri), and Iron Man’s capable and plucky Pepper Potts, to name just a few of my favourite MCU ladies.

So I didn’t really mind one way or another whether Marvel gave us a female-led blockbuster or not. Still, now that they have, people are asking me what I thought.

I’m an author, so I’m good at stripping stories back to the nuts and bolts. Overall, I really enjoyed Captain Marvel. It was a good story, well told, with plenty of humour and heart. It blows some of Marvel’s other recent origin stories out of the water (Doctor Strange, I’m looking at you. You too, Ant-Man). It reminds me of Marvel’s earliest origin stories – entertaining, satisfying, and marking a good beginning to a character who’s almost certainly going on to see bigger and better things. 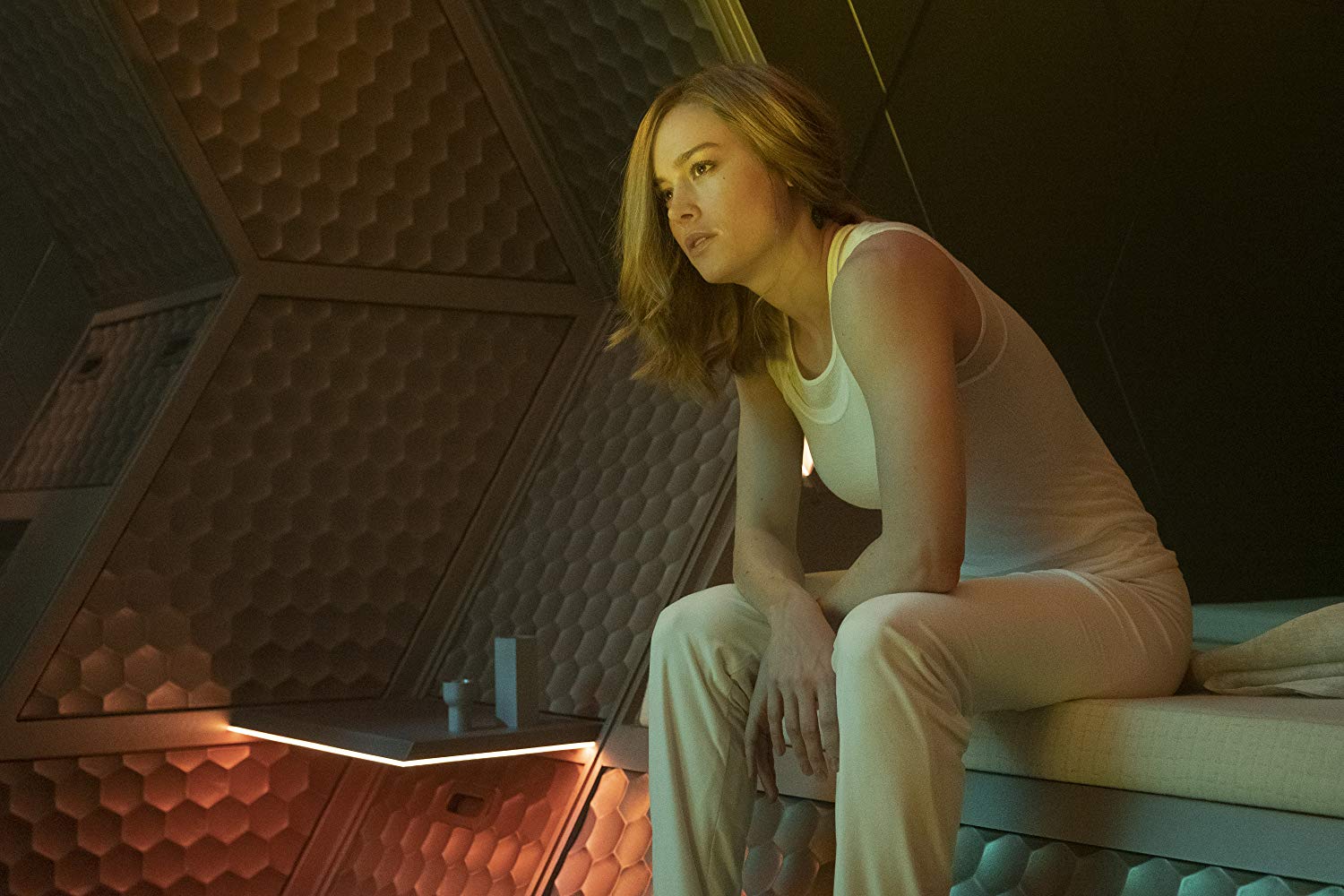 Our heroine is Vers, an amnesiac soldier with the interstellar Kree empire who struggles to control her mysterious powers. When a mission to a planet under attack by the sinister shapeshifting Skrulls goes wrong, however, Vers is confronted with fragments of her old memories. Who is she really? Where did her powers come from? Did she really have a past life on Earth…and just how did she end up as part of the Kree army?

Captain Marvel is no Winter Soldier, to this day the most exquisitely well-crafted story in the entire MCU. Nor is it like Black Panther or Wonder Woman, two films with storytelling flaws that are both lifted above themselves by resonant and well-crafted thematic content. It’s not by any stretch of the imagination a bad movie, but neither is it the complex and challenging film it could have been.

The central theme of Captain Marvel seems to be about the feminine strength of emotion and empathy. It’s about someone who’s always been told that her strengths are weaknesses, or that her strengths are only there because they were granted to her by others. Vers has forgotten who she is and what she can do. She’s been lied to and manipulated, and she’s come to believe those lies.

A year or two back I watched the classic Ingrid Bergman film Gaslight with my mother and sisters. It’s the story of a young woman whose husband begins manipulating her, convincing her that she’s insane. The term has stuck ever since as a descriptor of a particular kind of abuse that aims to convince people that they are weak, ill, or malicious when in fact they are not.

This is what has happened to Captain Marvel’s protagonist. As she begins to piece together her past life, Carol Danvers is manipulated by those who she thought were her friends. She’s told that her instincts should be ignored, that her emotions are a weakness and that her compassion is a flaw. Above anything else, she’s told to submit, control herself, and obey orders. Friends of mine who’ve been in similar situations tell me how much they related to the obstacles she faces: the realisation that her entire world was the opposite of what she believed and worked and fought for, the realisation that in order to change things she must overcome her own dependence on others. 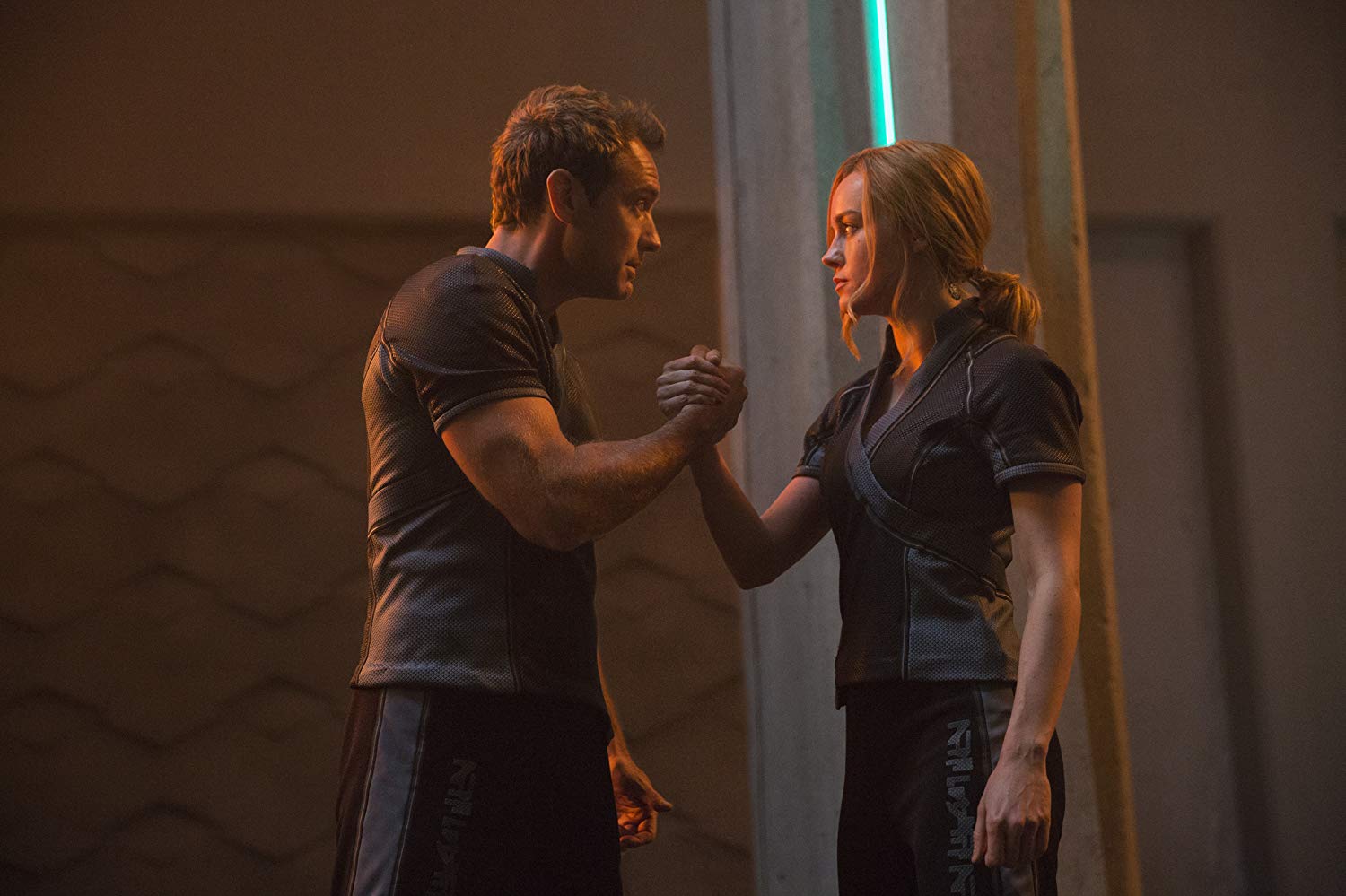 Don’t worry, the gaslighting villains in this movie aren’t tiresome, on-the-nose caricatures. In fact, we like them, and so does Carol. But the film calls her beyond them, and we follow. At the film’s turning-point, Carol comes face-to-face with a piece of her old life: her lifelong best friend, Maria Rambeau and her daughter Monica. Moreover, she finally learns the truth behind all the lies she’s been fed, and she realises that not only have her Kree superiors been lying to her…but they’ve been using her unquestioning obedience to fight an unjust war.

Her response is not to turn on her old comrades and destroy them: it’s to unlock her empathy, to show compassion and protective love toward the people that, till now, she’s been fighting. It’s hard not to think of the history of public schooling here: our model of state schooling was invented by Frederick the Great of Prussia for the explicitly stated purpose of turning out obedient citizens who would ignorantly and uncritically fight the emperor’s wars.

There were things I would have liked to see more of in this film. I would have liked to see Carol’s personal flaw (her belief in the lies she’s been told) have a bit more impact on her and be a greater challenge for her to overcome. The themes in this movie didn’t always fit into the plot as organically as, for example, the themes in Black Panther did, and they weren’t dealt with in such a mature or complex way. Gaslighting is bad! Questioning authority is good! All right, we get it. But there was more that could have been done with all this. For example, real victims of gaslighting wonder if there’s something deeply wrong with them, or even after they’ve escaped, feel guilty at having abandoned their abusers. Carol doesn’t seem to feel much, if any, angst about this.

So there were definitely things that could have been improved in this film. It amazes me, though, to hear some of the criticisms that have been made online. Listening to some, I’m half persuaded that they sincerely believe that Avengers: Endgame will be five minutes long and consist solely of Carol Danvers turning up to blast Thanos in the face. One article running on Desiring God was a pretty good compendium of the usual complaints. The sameness of the sexes is a myth! Yes, and one which Captain Marvel does not perpetuate in any way, as we explained. Woe is us when the MCU features a woman as the saviour and protector of men! Because the one-in-a-million superpowered girl saving the day somehow means that all women will now protect all men? Where were these criticisms when Natasha was beating up goons withoutsuperpowers? This movie will make your wives and daughters join the military! Not if they’ve been paying attention to how the military in this film is a lying, deceiving empire-building force mainly concerned to suppress our heroine’s conscience. The Marvel Cinematic Universe is being ruined by identity politics! I don’t know, maybe ask the thousands of satisfied filmgoers?

On the other hand, as I mentioned above, while I didn’t think Captain Marvel was a bad movie, neither did I think it was a great movie. But hear me out: I think it’s a kind of movie we need. 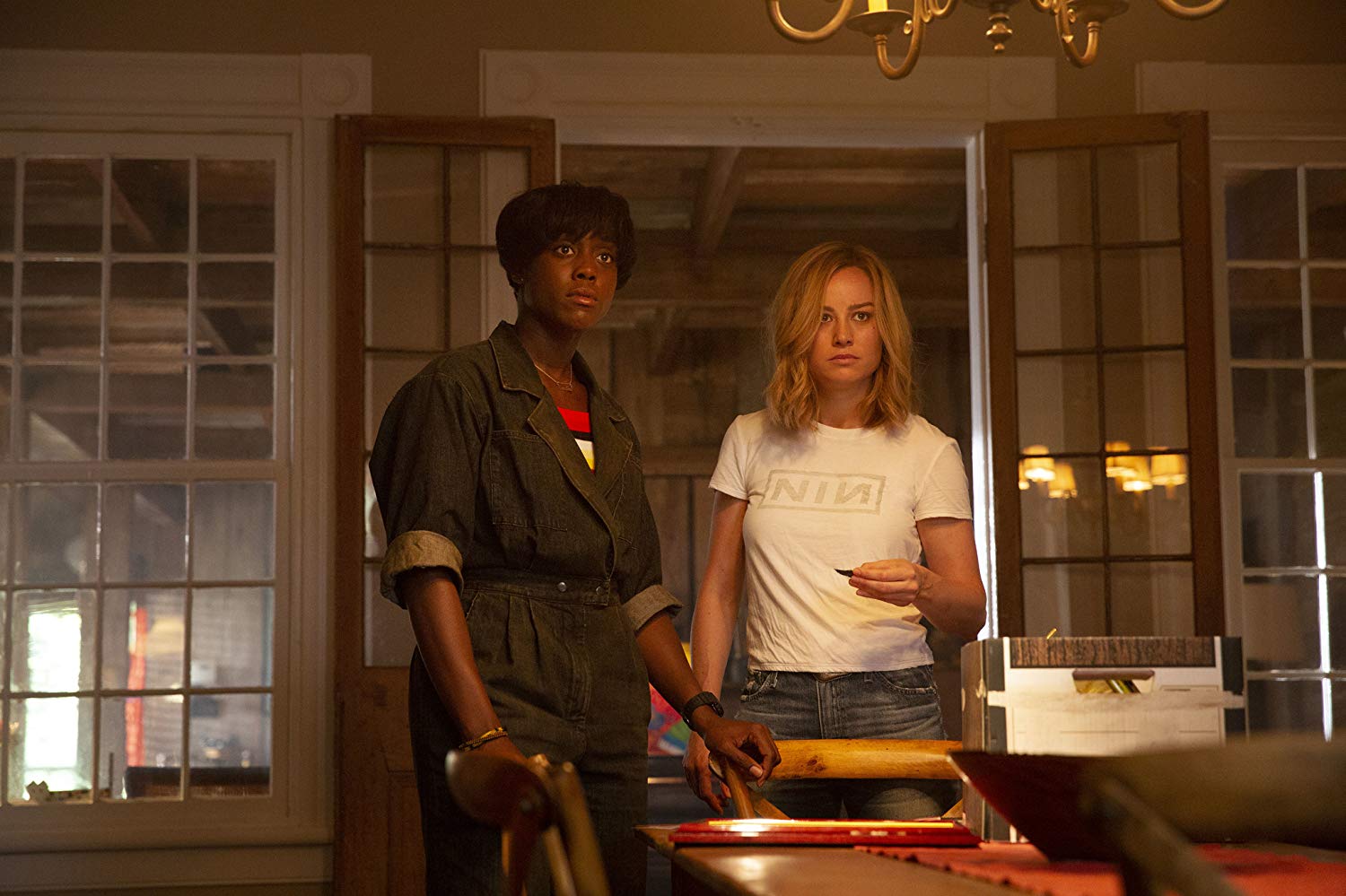 Why we need Captain Marvel

I got home from watching this film and immediately had some friends in a group chat ask me what I thought. I mentioned that it was about gaslighting. That touched off a whole discussion about what gaslighting is… And that led to one of my friends sharing some of her experiences being gaslighted in an abusive marriage.

I think we all left that conversation a little sadder and a lot wiser.

And this is why I think we need films like Captain Marvel. Not because it’s a great film – and not all films have to be. But because, however lightly, it touches on aspects of the human experience that some of us haven’t spent a lot of time talking about. If it wasn’t for Captain Marvel, we wouldn’t be having these conversations.

Conversations like this can be powerful. It’s been nearly a year since I helped start the Monstrous Regiment podcast, trying (however imperfectly) to speak out about justice for women. In the months since, I’ve been astonished as multiple friends of mine have opened up to me about abuses they’ve suffered, to an extent and destructiveness that I could never have imagined and had never even dreamed of. I hope that telling their experiences has helped these friends to heal, and I know that hearing them has equipped me far better to understand them, to love them, and to be more alert to the extent to which abuse and injustice exists within my community. I never or rarely heard anything about such things before I started speaking up about what God’s word says of the dignity and value of women. If I never had, I would still be ignorant.

Stories like Captain Marvel have the ability to start such conversations on a culture-wide scale. Women who might never before have wanted to burden even loving friends with their just complaints, might suddenly have opportunities to share about what they’ve experienced. Films that put women and the female experience front and centre don’t have to be heart-wrenching masterpieces. They can be entertaining, they can be funny, and they can help us all listen to each other a little better. That’s what Captain Marvel does, and that’s a superpower worth having.