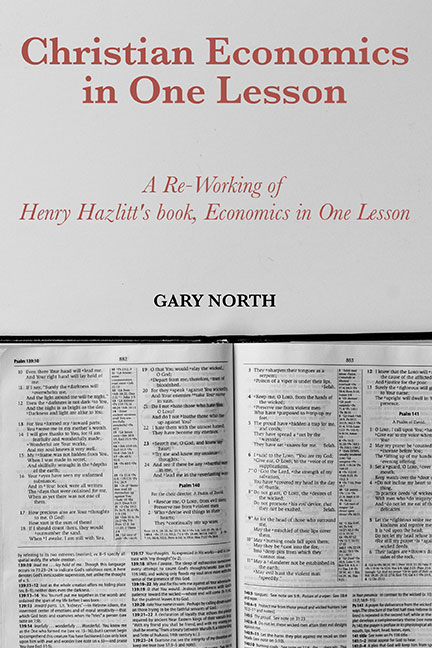 Christian Economics in One Lesson

This is Gary North’s re-working of Henry Hazlitt’s book, Economics in One Lesson (1946). While each chapter has the same title, he came to the same conclusions; but he did so by way of the Bible.

“Henry Hazlitt was a friend of mine. I like to think that he would have approved of my book. It targets an audience very different from his: Christians who are interested in both economics and ethics. His audience was initially readers of his New York Times column.

My book is different from Hazlitt’s. Our economic analysis is the same, but I openly label as theft the two dozen government intrusions into the free market that Hazlitt identified. He did not deal with the ethics of these intrusions. This weakened the case against them.

I begin with this principle: “Thou shalt not steal. “I supplement this with Jesus’ response to Satan, when Satan tempted Him to turn stones into bread to feed Himself. Jesus cited Deuteronomy: ‘Then was Jesus led up of the Spirit into the wilderness to be tempted of the devil. And when he had fasted forty days and forty nights, he was afterward an hungered. And when the tempter came to him, he said, If thou be the Son of God, command that these stones be made bread. But he answered and said, It is written, Man shall not live by bread alone, but by every word that proceedeth out of the mouth of God.’ –Matthew 4:1-4 There are no free lunches.

Ludwig von Mises in 1948 identified the underlying impulse of Keynesianism as being the same as described here: stones into bread, meaning something for nothing through credit expansion. In that essay, Mises made an error of judgment: ‘There is no doubt that the American public is moving away from the Keynesian notions and slogans. Their prestige is dwindling. Only a few years ago politicians were naively discussing the extent of national income in dollars without taking into account the changes which government-made inflation had brought about in the dollar’s purchasing power. Demagogues specified the level to which they wanted to bring the national (dollar) income. Today this form of reasoning is no longer popular. At last the “common man” has learned that increasing the quantity of dollars does not make America richer. Professor Harris still praises the Roosevelt Administration for having raised dollar incomes. But such Keynesian consistency is found today only in classrooms.’ On the contrary, Keynesian beliefs are found in almost every nook and cranny of the modern world. That is why there is a market for my book. The Remnant still holds out.”