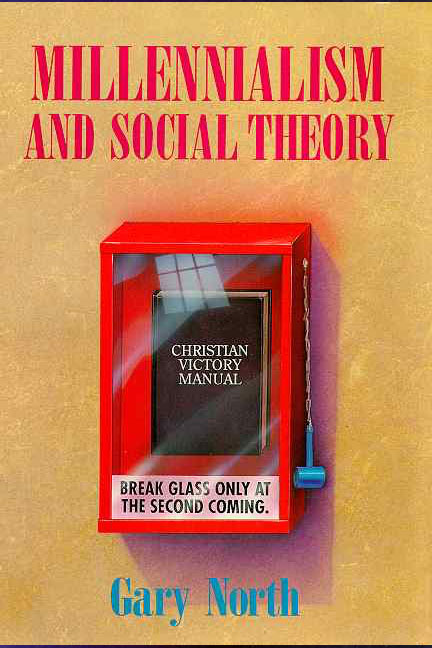 Person holding a sign that says: The End Is Near

Man in Business Suit says: “Have I got time for a cup of coffee?”

This is one of those pictures that really is worth ten thousand words. It summarized this book’s thesis: the cultural bankruptcy of modern evangelicalism and its chief cause, the doctrine of Christ’s momentary return.

Modern evangelicalism is like that fellow with the sign, and modern humanistic society takes its message just about as seriously as Herman does. A movement that believes the message of that sign is not going to produce a comprehensive challenge that is meaningful or even plausible to the Hermans of this world. Christianity cannot beat something with nothing. People who think they have time only for a cup of coffee and reading a gospel tract have nothing much to offer a civilization in crisis.

This does not mean that those holding the sign have no social theory. They do: a theory that they have not developed. They believe in a view of the world that has been developed in terms of philosophies other than the Bible’s. They have imported alien philosophies into Christianity. To the extent that they attempt to challenge modern man intellectually, they are using defective tools.

This present the case for the Bible as the sole foundation of valid social theory. Every social theory has a theory of sovereignty, authority, law, rewards and punishments, and cultural progress over time. The Bible offers a unique version of such theory. But modern Christians have rejected the idea of cultural progress. They also reject the idea of God’s sanctions in history. Finally, they reject biblical law. They have therefore been forced to import humanistic substitutes for these three crucial concepts. Very few of them have recognized what they have done, or have had done to them, in the name of Christianity. This book show exactly what has been done, and why it has distorted the Church’s efforts of evangelism.