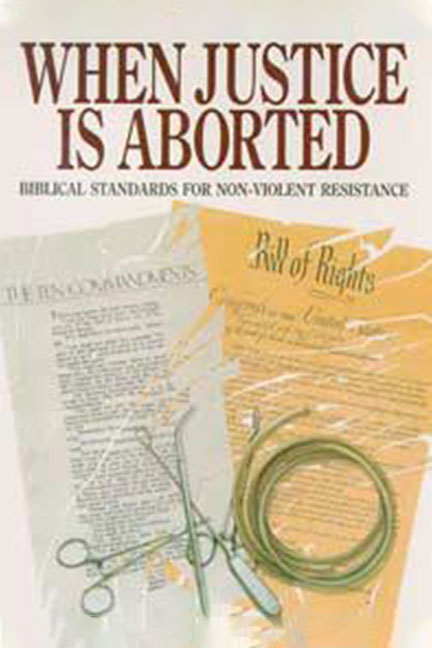 When Justice Is Aborted

Whose Law Is Sovereign?

This is a major question facing Christians today, all over the world. Informed Christians know that abortion is nothing less than state-legalized murder. They also know that it is not God-legalized murder. If God says that murder is immoral and illegal in His law book, then what are Christians supposed to do? How far should they go in protesting against abortion?

In this book, Gary North argues that Christians must go to the limit of the law in challenging abortion. The question is: Whose law? God’s law or the humanist state’s law?
This question is now dividing the Christian community in American. There is no agreement about God’s law. There is little awareness by Christians of the actual meaning of the state’s law in a world that believes in the religion of evolution. Finally, Christians have very little understanding of the relationship between God’s law and man’s law, between God’s requirements and the state’s. Abortion in now bringing this crisis in understanding into the open.

There is no halfway house between life an death. There is no middle ground in the abortionist’s office. The baby either lives or dies. There is not way to reach a politically acceptable compromise between the pro-life and pro-death movements. Both are well organized, and each is determined to have its way with the voters, the Congress, and the U.S. Supreme Court. A new civil war is looming, and the secular press admits as much.

But it is not just the nation that faces a civil war; it is also the churches. Just as many national denominations divided, North vs. South, over the question of slavery and the legitimacy of the South’s rebellion in 1861, so are denominations and even local congregations facing division today. They can no longer suppress the issues. They are coming inevitably to the surface. Each side claims that it is being obedient to God. Each side claims that it speaks in the name of God. Now that the protests have gone from picketing to trespassing, each side seeks to justify its own actions (or inaction) and attack the other in the light of God’s law.

When Justice Is Aborted presents an explicitly Biblical discussion of the question of non-violent protest by Christians. Its discussion relates to the abortion fight, but is not confined to it. These issues will surface again as the battle between secular humanism and Christianity escalates, as the battle between church and state escalates. There can be no compromise here, any more than over abortion. There is no halfway house position available any longer.

Where should Christians stand? On the sidewalk or in the doorways of injustice? When Justice Is Aborted shows where Christians stand if they are to remain faithful to God, and why.

And having stood, the next question is inevitable: Should Christians march?