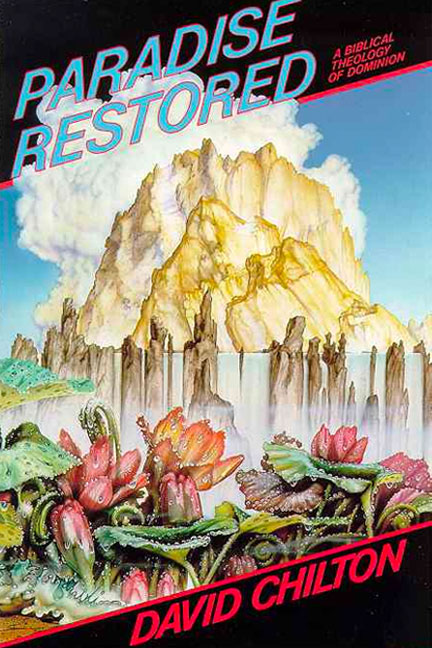 Chapter 19: A Brief Summary of Revelation

For the Lord touched all parts of creation, and freed and undeceived them all from every deceit. As St. Paul says, “Having put off from Himself the principalities and the powers, He triumphed on the cross” [Col. 2:15], so that no one could possibly be any longer deceived, but everywhere might find the very Word of God.
–St. Athanasius, On the Incarnation [45]

A BRIEF SUMMARY OF THE REVELATION

The Book of Revelation is not impossible to understand, but it is exceedingly complex. Its extensive use of Old Testament imagery would require volumes to explore fully. My purpose in the present book, of course, is simply to present in broad outline a Biblical exposition of the eschatology of dominion. (Those wishing for a more complete treatment of these issues should consult my commentary on Revelation, The Days of Vengeance, as well as other works listed in the Bibliography.)

As a whole, the Book of Revelation is a prophecy of the end of the old order and the establishment of the new order. It is a message to the church that the terrifying convulsions coursing throughout the world in every sphere comprised the final “shaking of heaven and earth,” ending once and for all the Old Covenant system, announcing that the kingdom of God had come to earth and broken Satan’s hold on the nations. In the destruction of Jerusalem, the old kingdom, and the Temple, God revealed that they had been merely the scaffolding for His eternal City, His Holy Nation, and the most glorious Temple of all.

See to it that you do not refuse Him who is speaking. For if those did not escape when they refused Him who warned them on earth, much less shall we escape who turn away from Him who warns from heaven. And His voice shook the earth then, but now He has promised, saying, “Yet once more I will shake not only the earth, but also the heaven.” And this expression, “Yet once more,” denotes the removing of those things which can be shaken, in order that those things which cannot be shaken may remain. Therefore, since we are receiving a kingdom which cannot be shaken, let us show gratitude, by which we may offer to God an acceptable service with reverence and awe; for our God is a consuming fire.
–Heb. 12:25-29

The following outline provides merely a thumbnail sketch of the primary message of the Revelation. In the interests of brevity, its formal literary character (for instance, the fact that it is structured in terms of both the creation week and the Old Testament festival calendar!) will be ignored for now.

Chapter One introduces the subject of the prophecy, assuring the readers that Christians are now ruling, even in tribulation, as kings and priests. It closes with a vision of Jesus Christ, making use of some important symbols which appear later in the book.

Chapters Two and Three contain messages from the Lord to seven churches in Asia Minor. The letters deal with the major themes of the prophecy, particularly the problems of Judaism, statism, and persecution. Christ declares that His church is the true Israel, the rightful inheritor of the covenant promises, and encourages His people to “overcome,” to conquer and reign in His Name. Although these letters are generally neglected, they actually comprise the central section of the prophecy. To a great extent, the later visions are simply supplementary illustrations of the lessons in this passage.

Chapters Four and Five give the Biblical philosophy of history: all things are seen from the perspective of the throne of God. Christ is revealed as the Conqueror, worthy to open the book of God’s judgments; creation and history are centered in Him.

Chapters Six and Seven show the breaking of the seven seals on the scroll, symbolizing the judgments about to fall upon apostate Israel. These judgments are specifically shown to be divine responses to the imprecatory prayers of the Church against her enemies; the governmental and liturgical actions of the church are the means of changing world history.

Chapters Eight and Nine extend this message in the actual opening of the scroll, revealing the coordination between the judicial declarations of the church on earth and God’s judicial decrees from heaven. Jerusalem is given over to Satan and his demonic legions, which flood the city to possess and consume its ungodly inhabitants, until the entire nation is driven into suicidal madness.

Chapters Ten and Eleven again present a vision of Christ, who announces that the New Creation and the New Covenant have become an accomplished fact. The witnessing, prophetic Church, seemingly annihilated by the Jewish persecution, is resurrected; and it is the persecutors who are crushed. With the destruction of Jerusalem and the overthrow of the Old Covenant scaffolding, the completion and filling of the new and final Temple are revealed to the world.

Chapter Twelve forms a dramatic interlude, portraying the basic battle of history in the cosmic conflict between Christ and Satan. The Son of God ascends the throne of His kingdom, unharmed and victorious, and Satan then turns to persecute the Church. Again, this assures God’s people that all their persecutions originate in the total warfare of the forces of evil against Christ, the Seed of the Woman, who has been predestined to shatter the Dragon’s head. With Him, the Church will be more than conquerors.

Chapter Thirteen reveals the all-out warfare which was approaching between the faithful Church and the pagan Roman Empire (the Beast). God’s people are warned that the religious forces of apostate Judaism will be aligned with the Roman State, seeking to enforce the worship of Caesar in place of the worship of Jesus Christ. With confident faith in Christ’s lordship, the Church is to exercise steadfast patience; revolution is condemned.

Chapters Fourteen, Fifteen, and Sixteen reveal the victorious army of the redeemed, standing on Mount Zion singing a song of triumph. Christ is seen coming in the Cloud of judgment upon rebellious Israel, trampling on the ripened grapes of wrath. The Temple is opened, and while the Glory-Cloud fills the sanctuary the divine judgments are outpoured from it, bringing Egyptian plagues upon the apostates.

Chapters Seventeen and Eighteen expose the essence of Jerusalem’s sin as spiritual adultery. She has forsaken her rightful husband and is committing fornication with pagan rulers, worshiping Caesar, “drunk with the blood of the saints”; the holy city has become another Babylon. God issues one final call for His people to separate themselves from Jerusalem’s harlotries, and abandons her to the ravaging armies of the Empire. At the sight of the utter ruin of apostate Israel, the saints in heaven and earth rejoice.

Chapter Nineteen begins with Communion – the joyful wedding feast of Christ and His Bride, the Church. The scene then shifts to reveal the coming worldwide dominion of the gospel, as the King of kings rides forth with His army of saints to wage holy war for the reconquest of earth. The agent of victory is His Word, which proceeds from His mouth like a sword.

Chapter Twenty gives a capsulized history of the new world order, from the first coming of Christ until the end of the world. The Lord binds Satan and enthrones His people as kings and priests with Him. Satan’s final attempt to overthrow the King is crushed, and the Last Judgment is ushered in. The righteous and the wicked are eternally separated, and God’s people enter into their eternal inheritance.

Chapters Twenty-one and Twenty-two record a vision of the Church in all its glory, comprehending both its earthly and its heavenly aspects. The Church is revealed as the City of God, the beginning of the New Creation, extending a worldwide influence, drawing all nations into itself, until the whole earth is one glorious Temple. The goals of Paradise are consummated in the fulfillment of the dominion mandate.

With this broad overview in mind, we can now proceed to a more detailed study of the imagery of Revelation, concentrating on four of the most dramatic and controversial symbols: the Beast, the Harlot, the Millennium, and the New Jerusalem. As we shall see, each one of these images spoke to the first-century Church about contemporary realities, assuring God’s people of Christ’s universal lordship and encouraging them in the Hope of the gospel’s worldwide triumph.