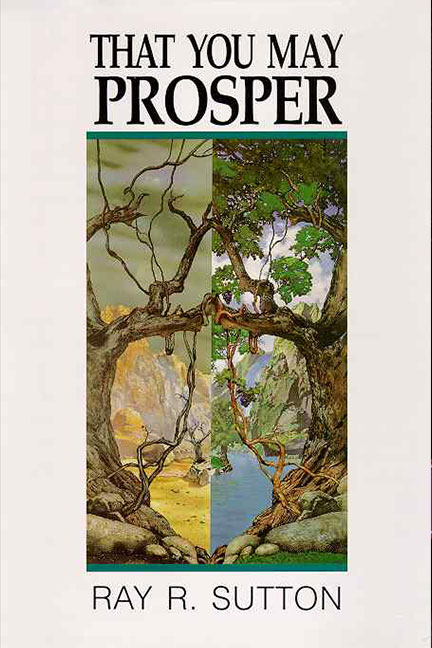 Because of the impact which That You May Prosper has begun to have on the broader Church, I have decided to scrap my original Preface and substitute a more generic one. The Foreword by Dr. Fisher presents the case for the five-point covenant model from both a biblical standpoint and a practical one. His Foreword should silence several academically inclined critics who have treated Sutton’s discovery with something bordering on contempt. Here I wish only to recall the conditions under which the first edition was written and then discuss several applications of Sutton’s thesis.

The manuscript began in 1985 as a study on the symbolism of baptism. As the editor, I told him that it needed extensive rewriting. What I eventually got was a completely different book. The manuscript went through at least four revisions. As it began to take shape, I realized that Sutton had stumbled onto something of great importance. When the manuscript was completed, I was convinced that the book would make a major theological contribution. How major? I discussed that in my original Preface, which readers may wish to consult. Some readers felt that I overestimated its importance. Time will tell. (So will eternity.) One thing is sure: Sutton offers us a precise definition of covenant theology, for which the Protestant world had been waiting for a long, long time.

Calvinism is known as covenant theology, yet it is one of the great ironies of history that for over four centuries, no Calvinist author before Sutton had spelled out in detail precisely what a biblical covenant is. A legal bond, yes. A personal bond, yes. A kind of contract, yes. But the judicial details that make a covenant legally different from a contract – above all, the presence of a self-maledictory oath – were never dealt with clearly prior to Sutton’s book. Not one Calvinist theologian had gone back to the Old Testament and returned with a tightly drawn, easily identifiable, biblically defendable covenant model. I said this in my 1987 Preface, and while some critics thought I exaggerated, I have yet to receive photocopied historical evidence to the contrary.

Typical is Louis Berkhof’s Systematic Theology (1939). His only discussion of the covenant appears in an eight-page chapter on the covenant of works, a theological construct that many Calvinists find difficult to defend exegetically. Two pages – one long paragraph – of the chapter are devoted to a sketch of the history of the doctrine. He confines himself to a discussion of the idea of federal headship, or legal representation. Almost the whole section is a string of names: Olevianus, Gomarus, Trelcatius, Ravensperger, “and especially Cloppenberg,” who was a forerunner to Coccejus, who was followed by Burmannus, Witsius, Voetius, Mastricht, De Moor, Ball, Blake, Gib, and Boston. So far, the hapless seminary student does not know anything specific about the doctrine, but he has a string of unfamiliar names (without dates) to memorize.

Then Berkhof takes up “The Scriptural Foundation for the Doctrine of the Covenant of Works.” He mentions Genesis 1-3, but cites nothing specific. Here is his only description of the covenant: “In the case under consideration two parties are named, a condition is laid down, a promise of reward for obedience is clearly implied, and a penalty for transgression is threatened” (p. 213). He calls these “all the elements of a covenant.” There was a promise of eternal life in God’s covenant with Adam, he says. The student might well ask: Then what was the tree of life all about? Was “forever not eating from the tree of the knowledge of good and evil” covenantally the same as “eating from the tree of life”? If so, then what unique positive blessing did eating from the tree of life impart – a tree identified in the New Testament with Jesus Christ?[1] If not, then what exactly was the covenant of works?

Understand, Berkhof’s book, nearly 800 pages long, is the most widely read Calvinistic systematic theology of the twentieth century – indeed, it is just about the only one. It is not just that Berkhof’s book is representative; it is virtually the lone example.

Into this near-vacuum came Sutton’s That You May Prosper. He uses Deuteronomy as his primary exegetical example, but he also appeals to other Bible passages. He appeals also to history. He discusses all three institutional covenants: church, state, and family, appealing to both the Bible and history. For the first time, the student has set before him a comprehensive, biblically grounded, and coherent presentation of the five aspects of the covenant: the sovereignty of God over history, yet His immanence in history; the hierarchical authority of God over His creation, with designated human representatives over other men; the law of God; the dual sanctions of the covenant, established by an oath: blessing and cursing; and covenantal succession: inheritance or disinheritance in time and eternity.

After the publication of the book, one correspondent wrote to Sutton and proposed a helpful memorization tool: an acronym, THEOS. This is the Greek word for God. The acronym stands for Transcendence, Hierarchy, Ethics, Oath, and Succession: the five points.

Sutton began his monthly newsletter, Covenant Renewal, in January of 1987. Each month, he applies the five-point covenant model to a biblical passage. At some point, he will be able to produce several books with the exegetical evidence he has accumulated. His newsletter provides monthly confirmation: the five-point model is no mere “procrustean bed,” as one theonomic critic has described it. It is in fact the key that unlocks the Scriptures.

England’s Central School of Religion awarded Sutton the Th.D. in 1988 on the basis of That You May Prosper. In 1991, Sutton became the president of Philadelphia Theological Seminary, the seminary of the Reformed Episcopal Church.

Applications of the Model

As soon as I saw the next-to-last version of Sutton’s manuscript, I spotted a mistake. Not a theological mistake: a rhetorical mistake. He had neglected to appeal to the most important piece of biblical evidence for his case: the Decalogue. I had just finished proofreading the page proofs of my book, The Sinai Strategy: Economics and the Ten Commandments (1986). I realized that the five-point biblical model governs the so-called two tables of the law.[2] The so-called First Table is the priestly code; the so-called Second Table is the kingly code.

I hastily wrote a Preface for The Sinai Strategy, which was due at the printers. I outlined the two sections as follows:

Succession: no coveting of another’s property, which constitutes family inheritance

Next, the covenant’s five-point structure became the integrating framework for six of the ten volumes in the Biblical Blueprints Series.[6] Two of the authors submitted manuscripts that instinctively conformed to it, even before they had seen That You May Prosper: Gary DeMar’s Ruler of the Nations and George Grant’s Changing of the Guard. As the general editor, I reversed two chapters in each book (with the authors’ permission) to produce a pair of books, each with two parallel sections of five chapters corresponding to the five-point model.

To date, the most spectacular application of the five-point model is David Chilton’s masterful commentary on the Book of Revelation, The Days of Vengeance (1987). I had hired Chilton to write this book three and a half years earlier. He had written Paradise Restored (1985) in the meantime, but he was bogged down on Days of Vengeance. Then, in a Wednesday evening prayer meeting in 1986, Sutton presented his five-point model. Chilton was in attendance. Sutton’s outline clicked in Chilton’s mind. He approached Sutton immediately after the meeting and began to ask questions about Sutton’s model and the Book of Revelation. He kept asking questions for many weeks, as he restructured his manuscript.

Chilton recognized that the Book of Revelation is at least two things: a covenant lawsuit against Old Covenant Israel and a model for church liturgy. He used the five points of the covenant to restructure the commentary with respect to both the covenant lawsuit and covenantal liturgy. Perhaps for academic reasons, Chilton appropriated Meredith G. Kline’s terminology for the first two points: preamble and historical prologue, but the actual content of the commentary indicates that Sutton’s usage is dominant, not Kline’s. Chapter 1 is “King of Kings,” indicating transcendence. In the Introduction to Part 1, he writes: “The purpose of the covenantal Preamble is thus to proclaim the lordship of the Great King, declaring transcendence and immanence and making it clear from the outset that his will is to be obeyed by the vassals, his servants. Biblical treaties set forth God’s transcendence and immanence by referring to one or more of three activities: creation, redemption, and revelation.”[7] Chapter 2, which begins Part 2, “Historical Prologue,” is titled: “The Spirit Speaks to the Church: Overcome!” Chapter 3 is “The Dominion Mandate.” Chilton’s focus here is hierarchy and authority, not historical prologue.

For those who doubt the applicability of the five-point model beyond the Book of Deuteronomy, Chilton’s Days of Vengeance is required reading. The book’s Foreword, written by English evangelical theologian and Old Testament specialist Gordon Wenham, added authority to Chilton’s creative application of Sutton’s discovery. Chilton’s Days of Vengeance is one of the most impressive secondary support volumes ever written in defense of another author’s primary thesis. It may be the most impressive back-up book ever published in the same year as the primary book. In fact, it was published first.

Kenneth L. Gentry’s book, The Greatness of the Great Commission (1990) also applies the five-point model to an important New Testament theme. He adopts the acronym THEOS. He describes the ancient suzerainty treaties by using the THEOS outline, and writes that “God’s covenant follows the same pattern.”[8] Part II of the book consists of five chapters: The Declaration of Sovereignty, the Exercise of Sovereignty, The Terms of Sovereignty, the Commitment of Sovereignty, and the Continuance of Sovereignty.

There are those who argue that there are other structures to various biblical covenants, with six, seven, or even more points. I say in response: “Let’s see one example that does not overlap two or more of the points.” So far, I have seen none. There have been several attempts. In every case, the extra points obviously overlap, leaving Sutton’s five points.

There is a tendency among scholars to reject new findings on the basis of the familiar “too good to be true” argument. Underlying this argument all too often is the NDH agenda: Not Discovered Here. They are correct regarding the latter point: the biblical covenant model was discovered in far-off Tyler, Texas, by a full-time pastor who was painfully recuperating from a very serious burn. The lesson: just because a man is an overworked and underpaid pastor does not mean that he cannot make a major theological discovery. This should serve as an encouragement to full-time pastors rather than as a discouragement to full-time theologians.

[1] “Blessed are they that do his commandments, that they may have right to the tree of life, and may enter in through the gates into the city” (Rev. 22:14).

[3] The key issue here is property rights, although I did not see this at the time. God’s name is declared “off limits,” just as the tree of the knowledge of good and evil was. He places a “no trespassing” sign around His name.

[4] In the Preface, I used “Judicial/evaluational (sanctions).”

[5] In the Preface, I used “Legitimacy/inheritance (continuity).”

[7] David Chilton, The Days of Vengeance: An Exposition of the Book of Revelation (Ft. Worth, Texas: Dominion Press, 1987), p. 49. Emphasis in original.