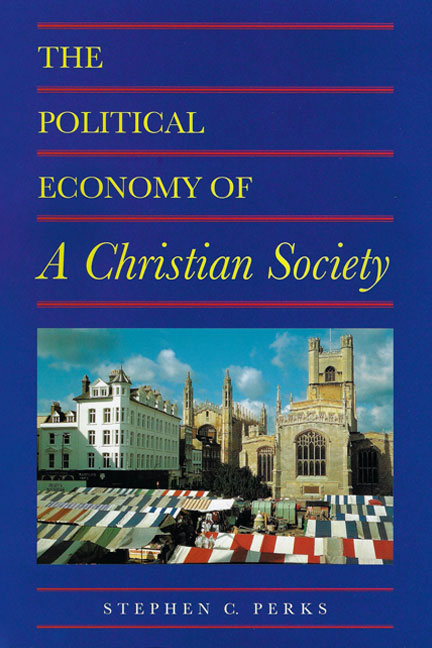 T purpose of this book is to introduce the reader to the subject of Christian economics. What I have to say must of necessity be condensed, and much detail will be left out. My aim has been twofold: first, to give a general overview of the field of economics; to elucidate the general principles of economic concepts and the basic structures of economic institutions, and to provide a perspective that will enable the reader to assimilate the details of our modern economic system into an overall understanding of how the economy has developed and currently functions. Secondly, I have tried to indicate in what respects the economy needs to be reformed if it is to conform to Christian standards and so point the way to what the political economy of a Christian society should be like. Because I am attempt- ing to approach this whole subject from a Christian—that is to say a biblically informed—perspective, there are a number of important qualifications and explanations to be made regarding subjects sensitive to Christian ethics, especially in certain areas where biblical teaching relevant to the subject in hand has been misunderstood, abused or neglected, and these are dealt with in the appendices.

A glossary of terms has been included at the end of the book. There is a certain amount of overlap with the main text in this glossary. Nevertheless, it seemed a good idea to summarise certain concepts and provide definitions for frequently used terms and make these available for quick reference in a glossary.

I should like to express my thanks first of all to Michael G. Butcher, a trustee of the Kuyper Foundation, with whom I have spent many hours discussing and debating the issues raised in this book. That process of discussion and debate has made a valuable contri- bution to my understanding of the ideas that form the content of this book. A particular word of thanks must go to Colin W. Wright, also a trustee of the Kuyper Foundation, for the encouragement he has given me and for reading earlier drafts of the manuscript and making many helpful comments and suggestions. I should also like to thank Bob Graham and Chris Passerello for reading earlier drafts and Esmond Birnie, Paul Mills and Matthew Wright for reading parts of earlier drafts and making many helpful comments, suggestions and criticisms. Thanks are due also to Matthew Jenkinson for proofreading the book and to the members of Covenant Reformed Church, Leyton, East London, Dave and Ruth Paul and family, and Nick and Julie Pike, whose generous support has made the printing of this book possible. Finally, a very special word of thanks must go to my wife, Susan, whose help and support has been and continues to be vital to the work that this book is a result of.