The Biblical pattern for the family and its prescription for the respect and care for its elderly members is the focus of episode 94 of the Out of the Question podcast.

087: Why Does Our Culture Embrace Romance Rather Than Marriage?

In episode #87 of the Out of the Question Podcast, the Steve Macias and Andrea Schwartz discuss the paradox of a culture that embraces romance over marriage.

075: What Place Do Devotionals Have in the Life of a Christian?

Out of the Question episode #75 discusses the pros and cons of using devotionals when it comes to the prayer life of a believer.

064: Does Shielding Children from a Pagan Culture Just Delay the Inevitable?

Episode #64 of the Out of the Question Podcast discusses the sheltering of children by educating them in a Christian environment.

Outside the Box – #9: Taking It to the Next Level

Outside the Box – #8: Ambassadors to Neighbors 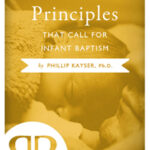 Many Protestants today see the baptizing of infants as an invention of the Roman Catholic Church. But during the Reformation of the 16th century, when the Protestant Reformers threw off many unbiblical practices of the Roman Church, they continued to baptize infants. Were they duped? Did they lack thoroughness in their reform? Or did they see Biblical merit in including the children of believers in the covenant family of God? This booklet proves the abiding validity of administering the sacrament of baptism to covenant children.